Let’s go red deer hunting in the Highlands of Scotland. The film’s partners are prestigious: Sauer, Swaroski, Kuiu and Hornady.

We can’t say that the weather is bad, it’s simply Scottish weather! It’s raining, it’s windy and our farsighted hunting friends are well wrapped up. The hunter accompanied by his guide crosses the moor in search of an interesting target. He finds a carelessly lying red deer chewing on some grass. They approach within 80 meters overhanging the deer. This one by instinct gets up but remains motionless, the senses on the alert.

It is too late, it is already in the telescope of the hunter who shoots it. The bullet is in the chest, he falls on the spot. The hunter and his guide congratulate each other. The team is accompanied by a woman, doctor in biology, who explains that this area was completely devastated by a fire 8 years ago. She is with them to assess the progress of the deer ecosystem and habitat. This is the end of this first day. They come back by boat with the deer. They cross a loch, which is often essential for hunting in this region.

Second day. Niall, the Scottish guide explains the principles of the hunting policy and safeguarding the territory. Then they move on to new territory. The weather is even worse than the day before. Rain and fog. The images of a moving herd of deer punctuate their movement. We also see a few Scottish sheep grazing in the moor. They spot a beautiful 7-8 year old deer that they admire for a long time.

But Niall advises the hunter not to shoot him. The deer leaves proudly without knowing that he almost went there. They end up returning empty-handed but happy to have seen all these magnificent images and not frustrated at not having shot anything. We find the team for the third day of hunting in the Moors, with the sea in the background. Animals abound. You will have to choose. The trails are steep and the terrain slippery. The approach is really not easy but at the end, there is a beautiful deer lying and surrounded by his herd.

They will wait two hours before the deer deigns to get up and there he will shoot him. Like the first. All clean. A beautiful deer trophy, at least 9 years old. Of course, this memorable stay ends with a good cup of tea. 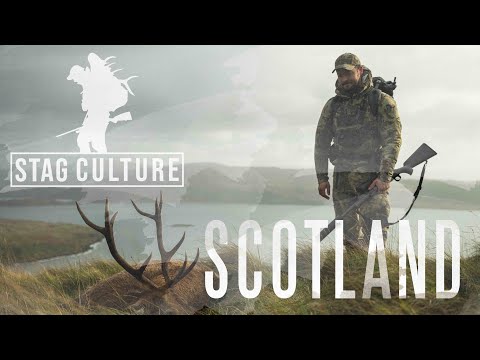