With the delivery of the first Model Y Propulsion, we begin to know more about the car and its equipment. And we hear and read a lot of disappointed people about the fact that many rumors have not been confirmed. So is it a discounted Model Y? Nothing is less sure… 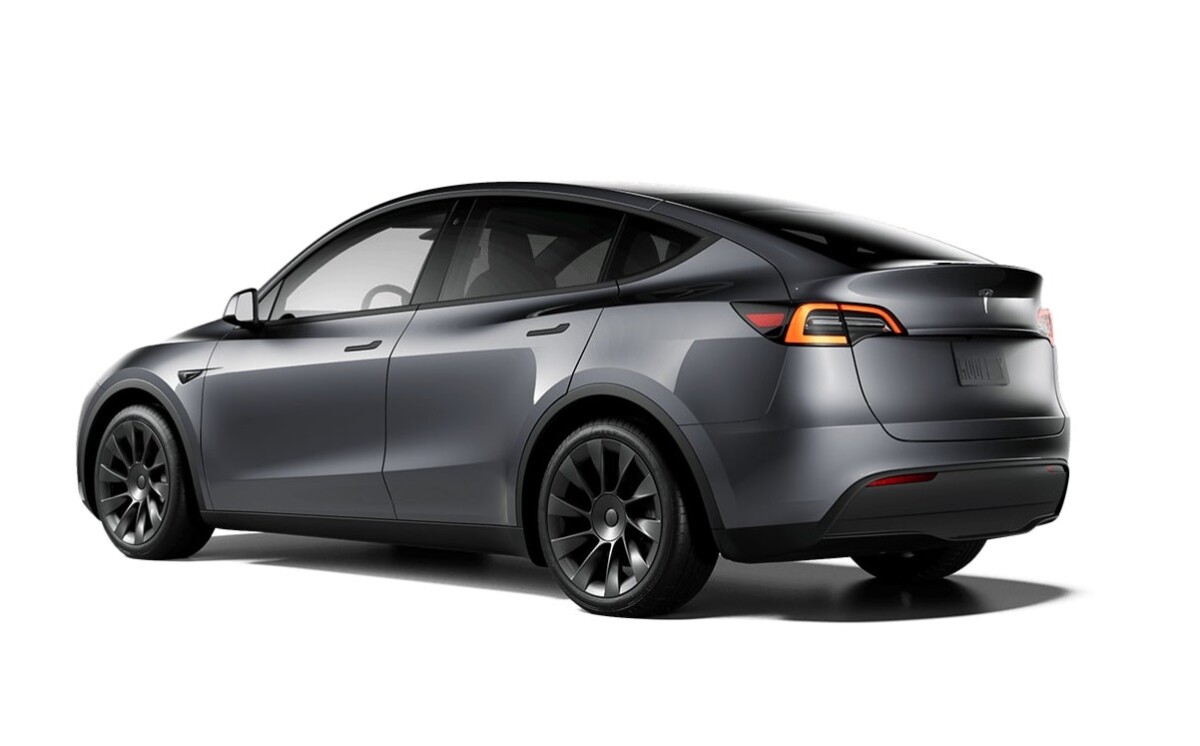 That’s it, for the past few days, a wave of Tesla Model Y has been flooding the Old Continent. The trucks coming up from Barcelona where the boats from China unload the cars produced at the Gigafactory in Shanghai are regularly photographed. And the photos shared on groups and other forums dedicated to the now Texan firm. Above, there are obviously the highly anticipated Tesla Model Y Propulsion presented at the very end of August and the first copies of which have been delivered to the first customers in recent days.

While waiting for the first “official tests” from the press, it is therefore the lucky ones who distill the first information on this entry-level SUV, which we recall that it upsets the price pyramid in the range by becoming cheaper than the cheapest Model 3. So what are the first returns? Does it live up to expectations? To read some of them, the Model Y seems disappointing… And yet!

The unconfirmed rumors about the “TMY Prop”

In the first feedback that we read on social networks and on forums dedicated to the model or more generally to the brand, some were moved to find… only a Model Y. Normal. In the sense that the car does not confirm certain rumors. Not to say all.

Among these, those on the upcoming arrival of new suspensions. Information that also came from the very top since it was Elon Musk himself who tweeted that comfort would be improved. But despite the confirmation also that these suspensions were already in production, it would seem that the first customers delivered do not see any significant difference with the suspensions of a Model Y Grande Autonomie for example, finding the same firmness on the newcomer. 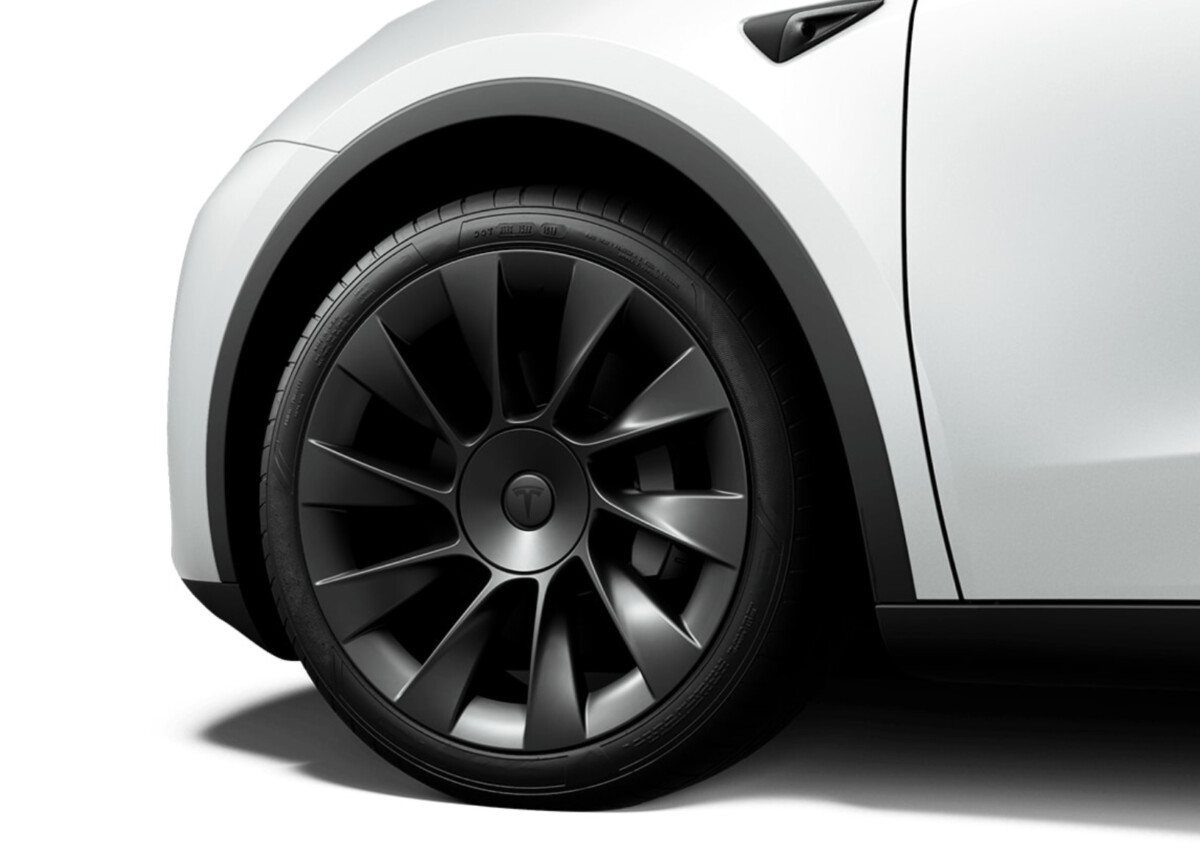 Another novelty expected on the Model Y and that the Propulsion version has not (yet) confirmed: the extended rear seat. Indeed, photos had leaked from Shanghai showing a rear seat whose right and left seats were extended on the front by three centimeters. But the first models delivered clearly do not have them, with a bench seat with a straight, rectilinear cut, in all respects similar to that of the Model Y Long Autonomy and Performance already on the roads. 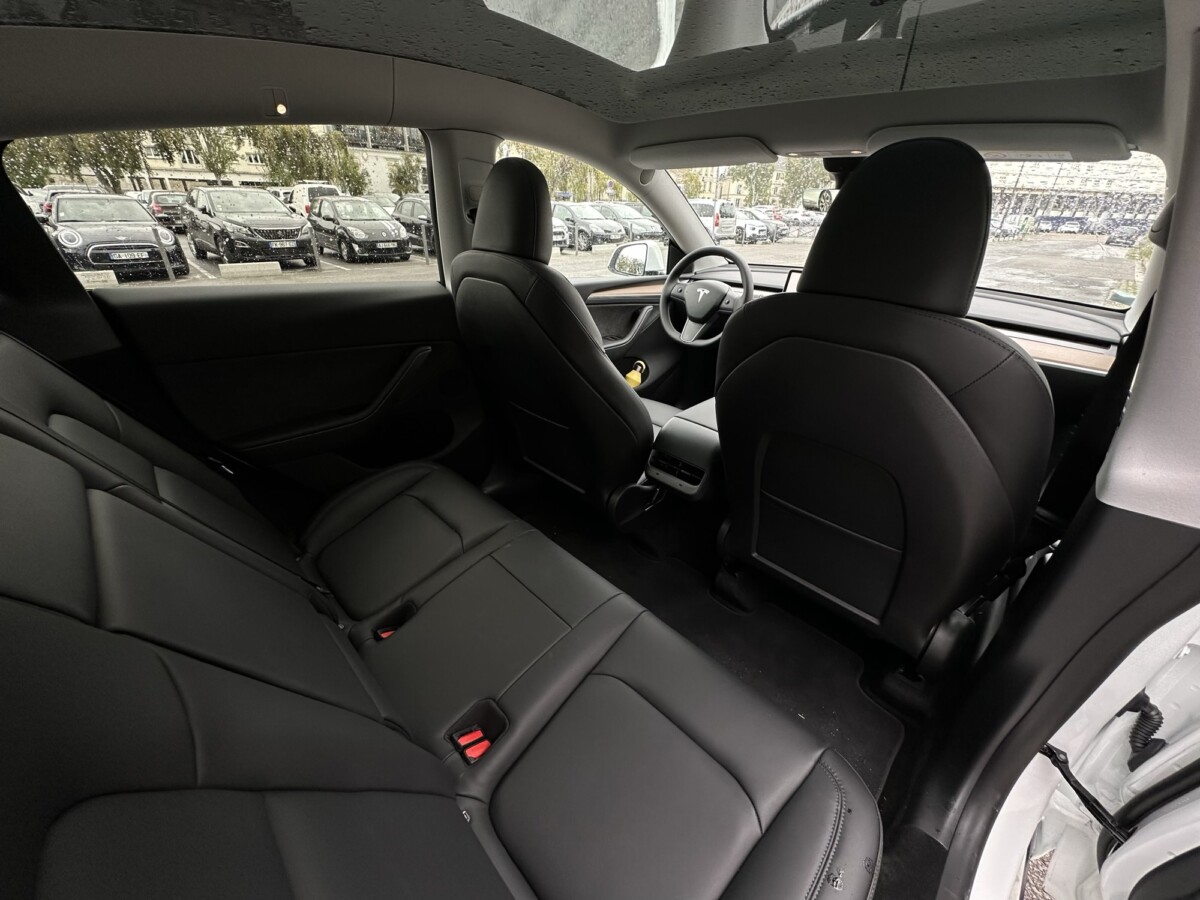 Also expected is the opening of the electric frunk at the front, as some app screenshots seemed to indicate. Again, Model Y Propulsion owners will have to do without it and continue to open and close it manually. Or else raise motorized jacks in aftermarket (aftermarket), as found on some sites.

Let’s move on to the new steering wheel or even the aluminum pedals, so many pieces of equipment that were more rumors than real confirmed expectations, and that some obviously expected to find standard on the brand’s least expensive model…

Lack of conventional sensors and cameras…

And then there is the main subject that comes up with all the commentators of the Tesla Model Y Propulsion, whether they already have the vehicle or are not even customers, it is the absence of ultrasonic sensors. It must be said that with the absence of fog lights (again some are offended by it when it was announced from the presentation of the model and that the Model 3 Propulsion does not have either), it is THE big aesthetic difference on this 2023 vintage of Model Y.

The parking sensors integrated into the front and rear bumpers therefore completely disappear in favor of an entirely smooth surface. This is true on the Model Y Propulsion, but also on the TMY LR (another name for the Model Y Long Range), the Performance version and the brand’s other cars.

To deal with this, much has been said about new 5 million pixel cameras all around the car. But again it seems that they are not there, and that the 1.2M pixel cameras already present until now are still in the game. Which leads to some concerns about the all-new Tesla Vision system…

…and the fear of the Tesla Vision

Because yes, rest assured, the disappearance of ultrasonic sensors is compensated by the system called Tesla Vision which is based precisely on the cameras to detect surrounding vehicles and for assistance during parking maneuvers. And it is precisely on this last point that the shoe pinches…

Because indeed, the first customers delivered of their Tesla Model Y Propulsion confirm, with supporting videos, that for the moment, the absence of sensors is only replaced by the retransmission on the central screen of the rear camera and side cameras. But no more indication of the distances around the car. At first glance no more beeps. And obviously no image from the front.

“Old-fashioned” maneuvers, therefore, or almost, where you only have to trust yourself and the three rear cameras, and which sound like a real step back. Something to scare new customers, especially when getting used to the dimensions of a new vehicle that may not be as beefy as a Model X, but much larger than the Model 3 sedan.

However, it should be noted that the Tesla Vision system is also deployed on current Teslas, even equipped with sensors. Which, if they still work and provide real comfort, should soon be deactivated.

This major problem on a car that is still displayed at 49,990 euros on the configurator should be resolved quickly. At least we hope so. Indeed, in the long term, even the most expensive versions, such as the Model Y Performance, should be devoid of sensors and be based entirely on the Tesla Vision. And it is hard to imagine that a car at 70,000 euros can be deprived. A fortiori, it will be the same for the Model S and Model X.

The deployment of the Tesla Vision will be done gradually, at the rate of new updates. Tesla had warned that some functions would be temporarily disabled or limited. Obviously it’s not very comfortable to be part of theA/B testing of Tesla but we are promised that eventually, the Tesla Vision will be more efficient. We understand Tesla’s decision to deploy this system all the better, not to mention that the brand would earn around $114 on each car without sensors. Multiplied by the 2 million cars that could be sold in 2023…

We must therefore take our troubles patiently, especially for the first customers who have cars without sensors, and be extra vigilant, especially during maneuvers.

That all those things seen in some of the early videos or read here and there on the two-wheel-drive version doesn’t come to put doubt in the minds of those waiting for their delivery. Because to listen to some, they would like the butter and the money for the butter.

Like, for example, buying the cheapest Tesla (when it shouldn’t even be!) and having a car with all the latest stuff. Even better equipped than other much more expensive models. 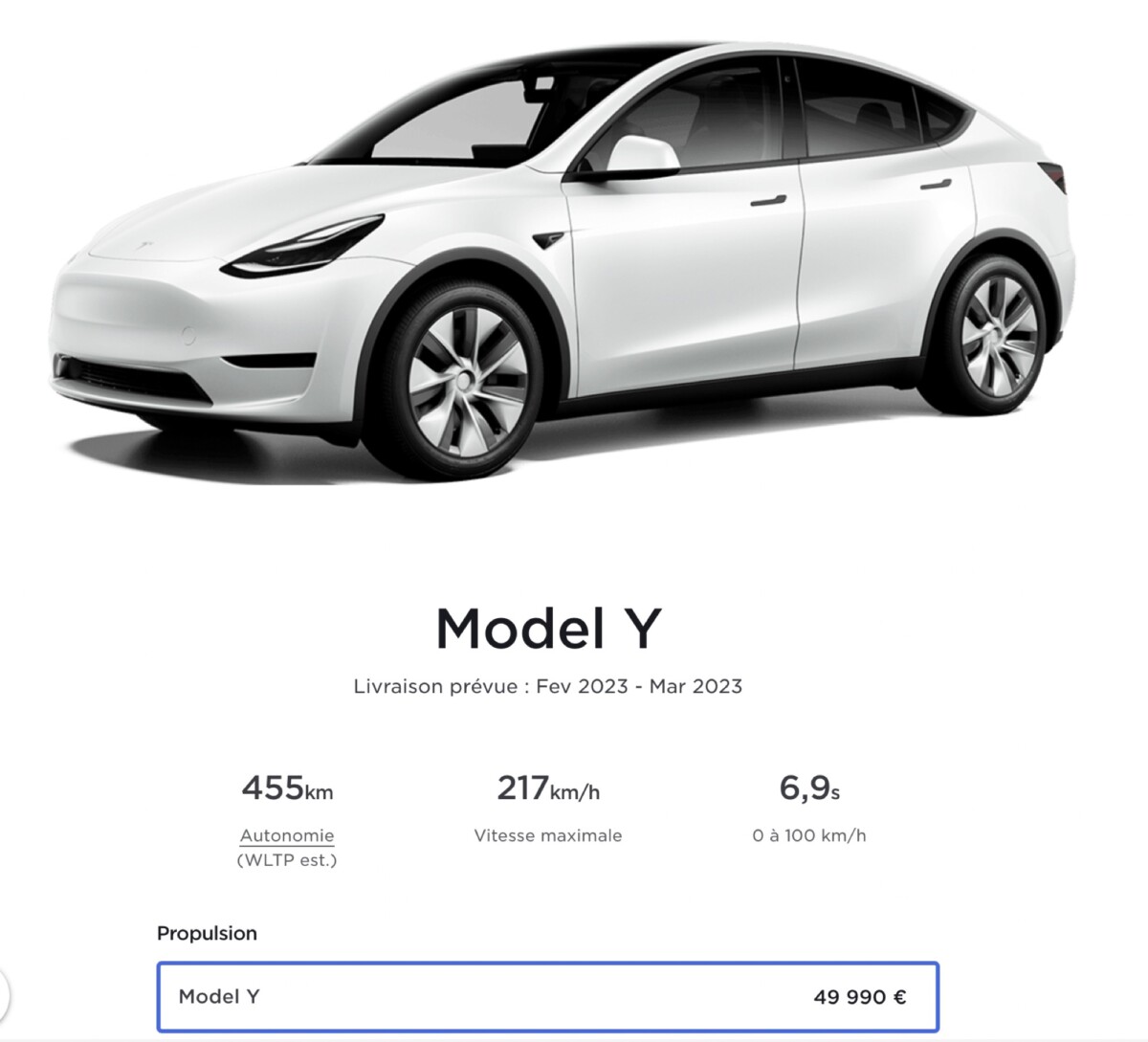 And then we imagine that the arrival of the first deliveries of this Model Y Propulsion has raised some frustrations among some. Especially those who would have liked to switch from their Tesla Mode 3 to TMY. But there again one cannot have the butter and the money of the butter.

That is to say reselling its sedan more expensive than it had been bought, already because of the ecological bonus touched during the purchase, but also because of the successive price increases of these last months. And therefore almost able to exchange it with a Tesla Model Y Propulsion whose price, at least in France and in certain markets, is surprisingly low.

Some were lucky or hollow-nosed and were able to do it, and frankly good for them. The others, whose estimates, exceptionally high, it should be remembered, lost 10 to 15,000 euros between the announcement of the TMY Prop and the real moment of the purchase which is authentic in the takeover offers, bite your fingers. And reassure themselves by saying that ultimately, the car is nothing special.

But in reality, it was understood in advance that this Tesla Model Y Propulsion would not be exceptional. Which surely does not prevent it from being a very good car, well equipped, at a surprisingly competitive price compared to the competition… And to another model in the range, the Tesla Model 3, which we recall that currently, on the French or Belgian configurator, is more expensive, and offers much less space on board and in the boot. But lower consumption and greater autonomy.

Its arrival in France will undoubtedly not go unnoticed, and for good reason: the Tesla Model Y Propulsion becomes the most affordable car from the firm of Elon Musk. Let’s take stock together…
Read more