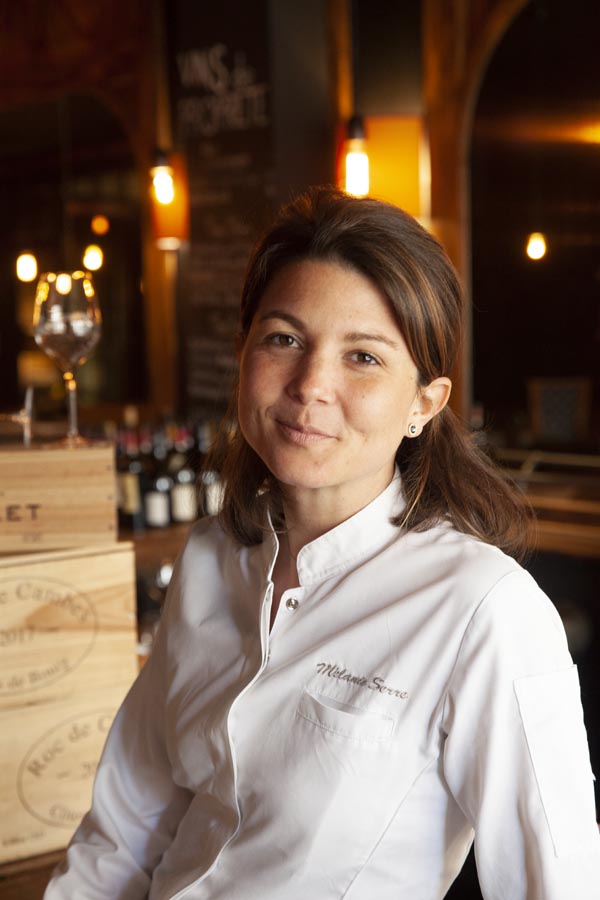 His life has changed. She got married (with the man who was her partner at Louis Vins, Bertrand Guillou-Valentin), is expecting a child, left Paris for the Arcachon basin (“ to see the light flicker and the day break in the morning here is pure bliss” , she says). Mélanie Serre, who was for a time the head of the Atelier Robuchon Etoile, bought, on a crush, the old Auberge du Bassin in Claouey, on the Cap Ferret side, of which she is preparing the opening. After hesitating to buy Louis Vins in the 5th arrondissement, this hardworking Ardéchoise, who retains her consulting activities (she allowed the Donjon d’Etretat to win its star and will continue to sign Elsa’s card at the Monte-Carlo Beach for next season in Roquebrune-Cap-Martin) has simply decided to change his life. The opening of his new Gironde table, in a gastronomic but relaxed way, should undoubtedly take place, after major works, next May. 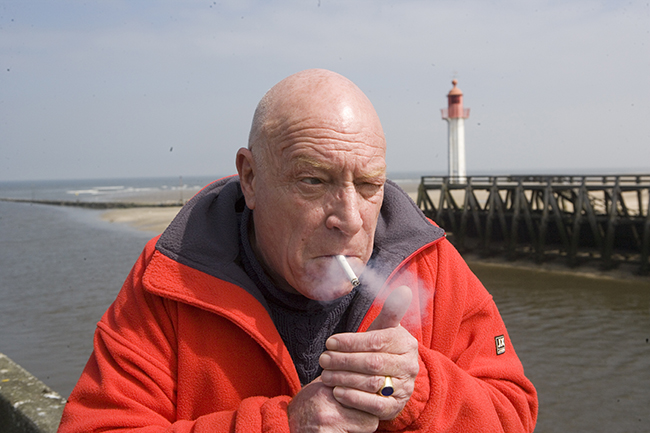 We called him ” Jacques Miocque“, from the name of its brewery-institution in Deauville. His name was Jacques Aviègne, was born in Le Havre, nine days after the victory of the Second World War (May 17, 1945). A sign… This former Terre Neuvas who was a waiter on “Le France”, having practiced the profession in New York, at the Relais sur Madison, had gradually become the little king of the queen station on the Normandy coast. Rue Eugène-Colas, which is the Champs-Elysées a mezza voce of the center of deauvillais, Miocque was for a long time master of his home, kissing some, yelling at others, in particular the critics who arrived at his house late (“ no, but you saw the time, I work, me Môsieur! »). The Michelin ignored it with superb. Miocque didn’t care. The most beautiful clientele in the world too, people from politics, entertainment and the media, who had their comforts at home. He had sold his house ten years ago, had made his comeback, two years later, thanks to a group of friends who wanted his presence here, before hanging up the gloves. Definitively. Since his absence, neither Miocque nor Deauville were what they were. Jacques was “our” loudmouth, our nostalgia, with his rudeness, his kisses, his shoves, his cider from David’s in Blangy, his Bordeaux crus bourgeois and his old calvas that we kept shutting down until later in the day. He was this Audiard character, living his life like a movie, belching with talent, humor, tenderness. We will miss you Jacques… 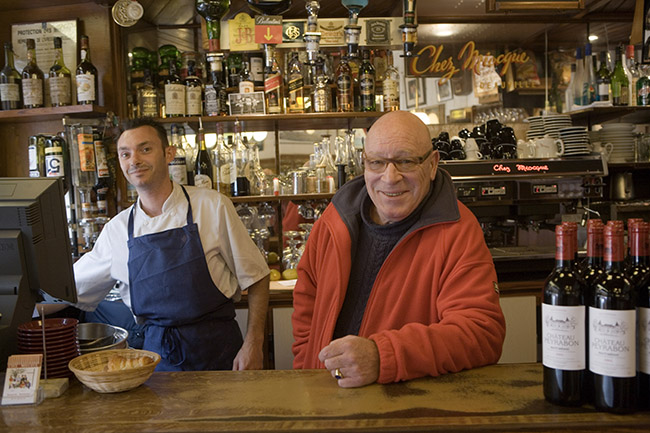 Yannick Alléno at Prunier, which is celebrating its 150th anniversary 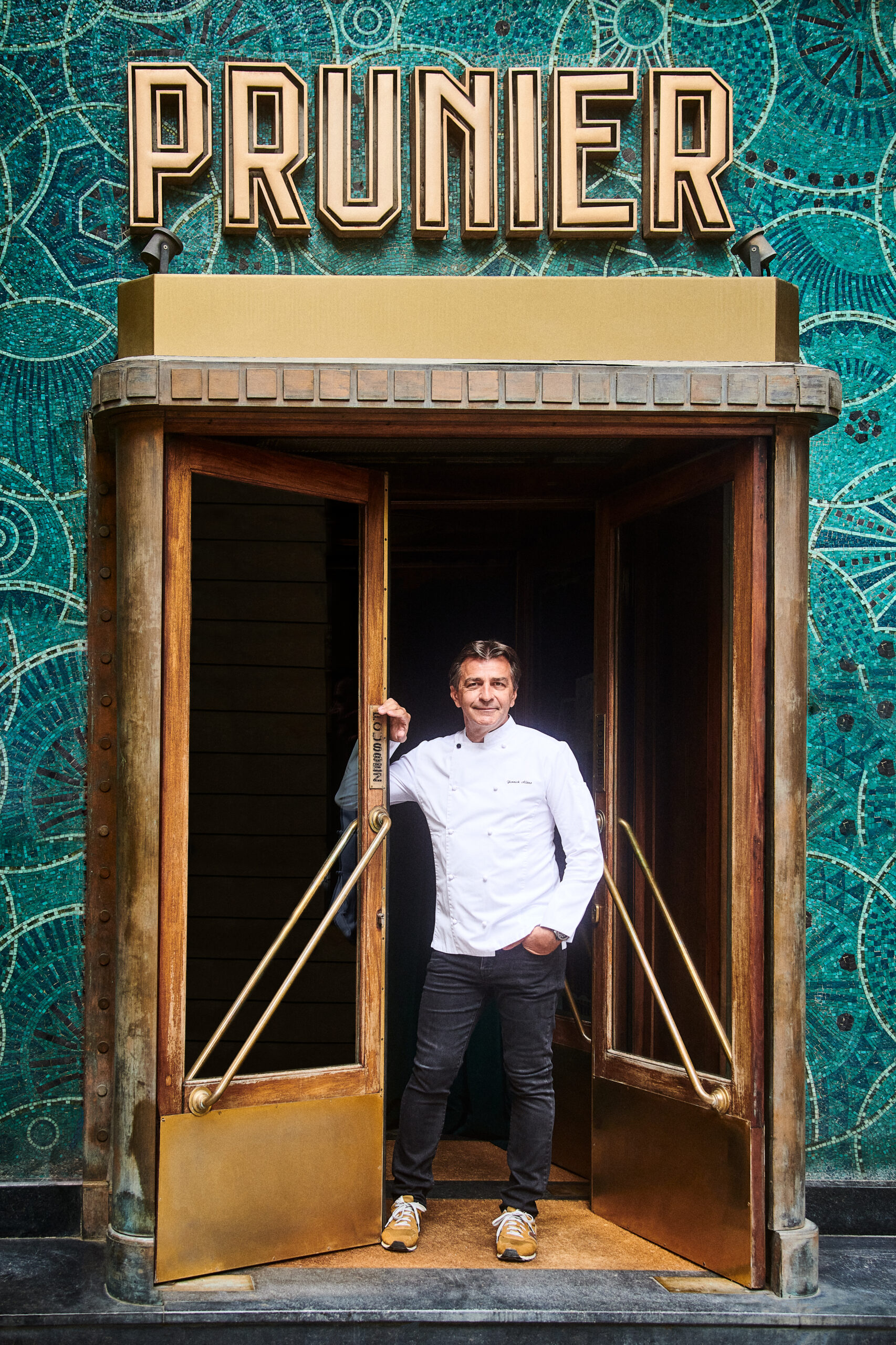 That Prunier changes style, reconnecting with its glorious past, we already told you two weeks ago. The novelty, the occasion of the fiftieth anniversary of the residence, created by Alfred Prunier in 1872 (it was then rue d’Antin in the 2nd) and whose motto was ” everything that comes from the sea“. Since then, water has flowed under the bridges. The house which had moved, in 1875, rue Duphot, has since been reviewed by Jean-Claude Goumard and his successor Philippe Dubois, becoming Goumard. The legendary Art Deco residence, from 1924, under the historic facade of green mosaics on rue Traktir, at the corner of avenue Victor Hugo in the 16th arrondissement, had been restored by Pierre Bergé. Then, the Caviar House and Prunier group, now owned by the OLMA group, with Stephane Petrossian and Philippe Der Megreditchian at the helm – Jean-Francis Bretelle and Peter Rebeiz, who have developed their concept of chic and marine snacking in airports around the world are still at the helm – , have changed their objective here, revising the quality on the rise under the aegis of Yannick Alléno. The three-star chef of Ledoyen, but also of Abysse and Pavyllon. who has the art of doubling up flexibly (he proved this recently in Pavie near Saint-Emilion and in Monaco in his Pavyllon de l’Hermitage) has designed an exclusively marine and high-quality card, ready to set off again for the race for the stars. The program includes araw angostine with geranium and caviar cream, a bend of line celery and caviar plated and fried Prunier-style whiting with tuna tartare and caviar grains. The decor has been revamped with chic by interior designer Alexandra Saguet, supported by Studios Gohard and L’atelier du Mur. This nine-hundred-and-fifty-year-old is doing well. 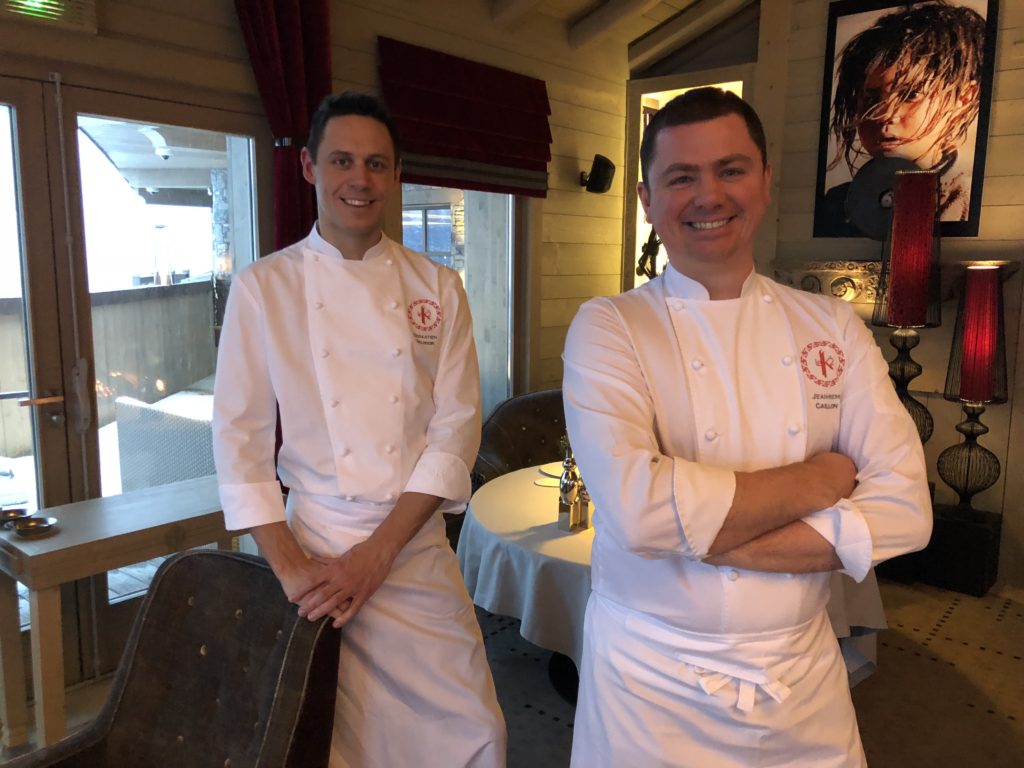 This modest Roannais, spent on the Côte d’Azur (at the Chèvre d’Or, with Philippe Labbé whom he followed in Paris at the Shangri-La), and on Lake Geneva, in Divonne then at the Hôtel de Ville de Crissier , was Nicolas Sale’s assistant at the Kintessence of the K2 Palace in Courchevel before replacing him. He will form an exceptional duo with the pastry chef Jean-Rémi Caillon, who will also obtain two stars, at the dessert restaurant, the Sarkara, which replaces the Kintessence at lunchtime. Now his destiny is calling him elsewhere in the resort and he is preparing to give a high-end gourmet image to the Pinturault’s Annapurna, a luxurious hotel but in a somewhat standardized fashion from the tops of the resort, which should thus upgrade to a higher range. Instead of Kintessence, the K2 group, under the help of its gourmet director Jean-Alain Baccon, is preparing to open its Sarkara in the evening, still under the leadership of Sébastien Vauxion, while multiplying the novelties: a very gourmet Lebanese restaurant, Ainata, should see the light of day at K2 Altitude, under the joint leadership of Alan Geaam, Pieter Riedijk, executive chef of the group and the two-star Montgomerie, and pastry chef Sébastien Vauxion. A more bistronomic version will be set up on the slopes, under the Base Camp by Ainata brand. The K2 Palace should welcome the same Peruvian brand as that launched last year in Val d’Isère, under the name of Altiplano. This will be started by Guillaume Duchemin, a veteran of the K2 group. 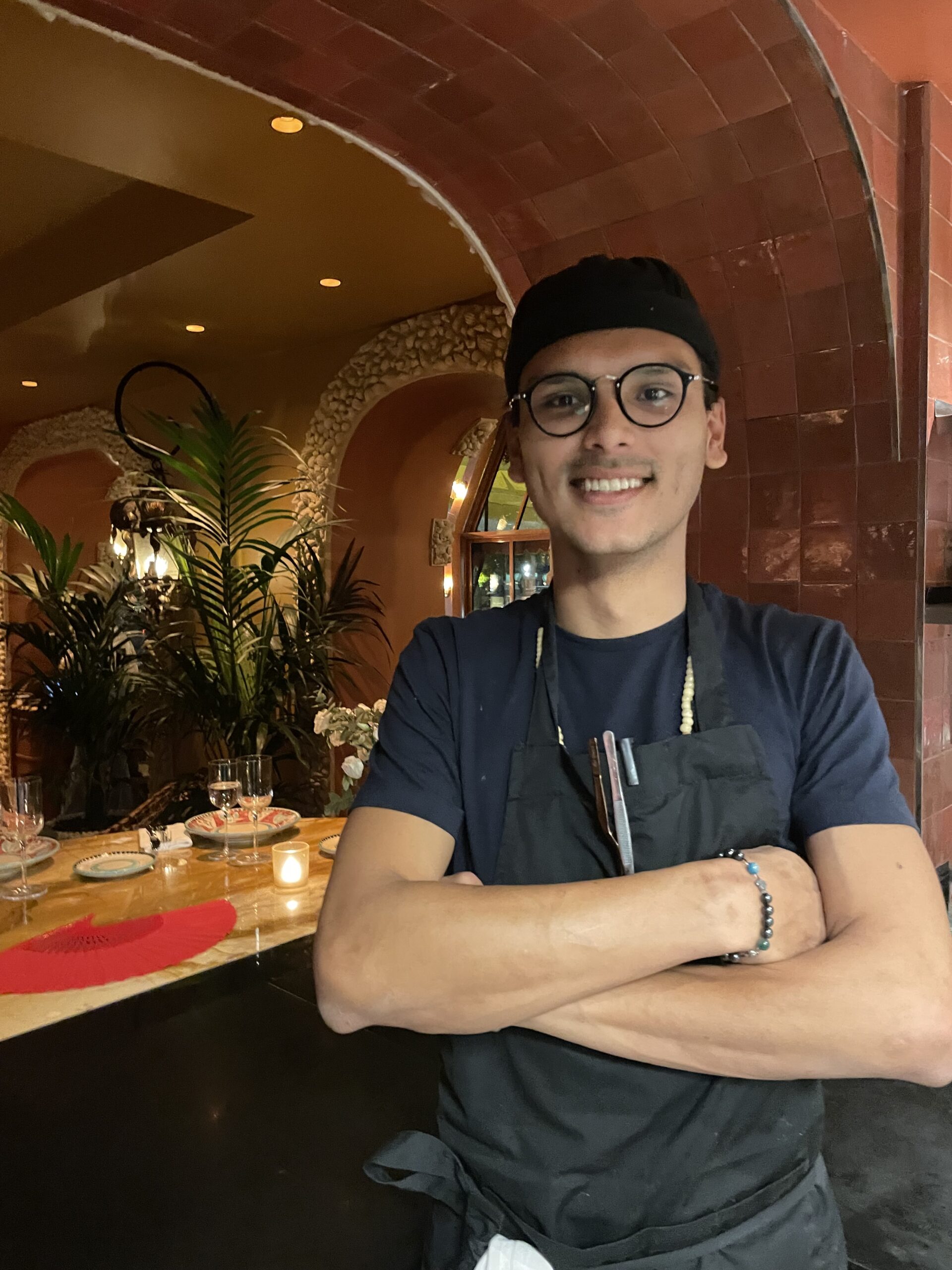 He is 26 years old, created the sensation in Paris, close to the Alma. The place ? It is called “Carmona”. The address? It was Antoine for a long time, with Thibault Sombardier. A young wolf replaces another. At the controls: the Colombian Esteban Salazar, from Manizales, city perched at an altitude of 2700 meters on the Andes cordillera who cut his teeth in Missouri in the USA, then returned to Colombia as sous-chef at the Clic-Clac hotel, before working at the Habitation Ceron in Martinique, in a 70-hectare park, with its self-sufficient kitchen, making with its team its own salt, vinegar, butter, charcuterie, using more than 25 species of wild products found in the surrounding forest. He then flew to San Sebastian to follow a master’s degree at Basque Culinary Center, rubbing shoulders with the great starred Basque chefs of the constellation of Donostia. In Paris, in a rejuvenated setting, with a view of the Eiffel Tower, signed by the Alex Mabille cabinet, he offers lively, marine, vegetal, carnivorous cuisine, with vegan ideas, making pretty nods to Spain. On the program, cRoquetas of kale and mascarpone, pimientos de padròn, oyster mushrooms and confit egg yolk, anchovies in olive oil from the island of Thassos, barbecued oysters bathed in their coriander oil with black lemon are tasted, thanks to a joyful disorder in pretty earthenware plates with Andalusian airs. We’ll tell you soon! 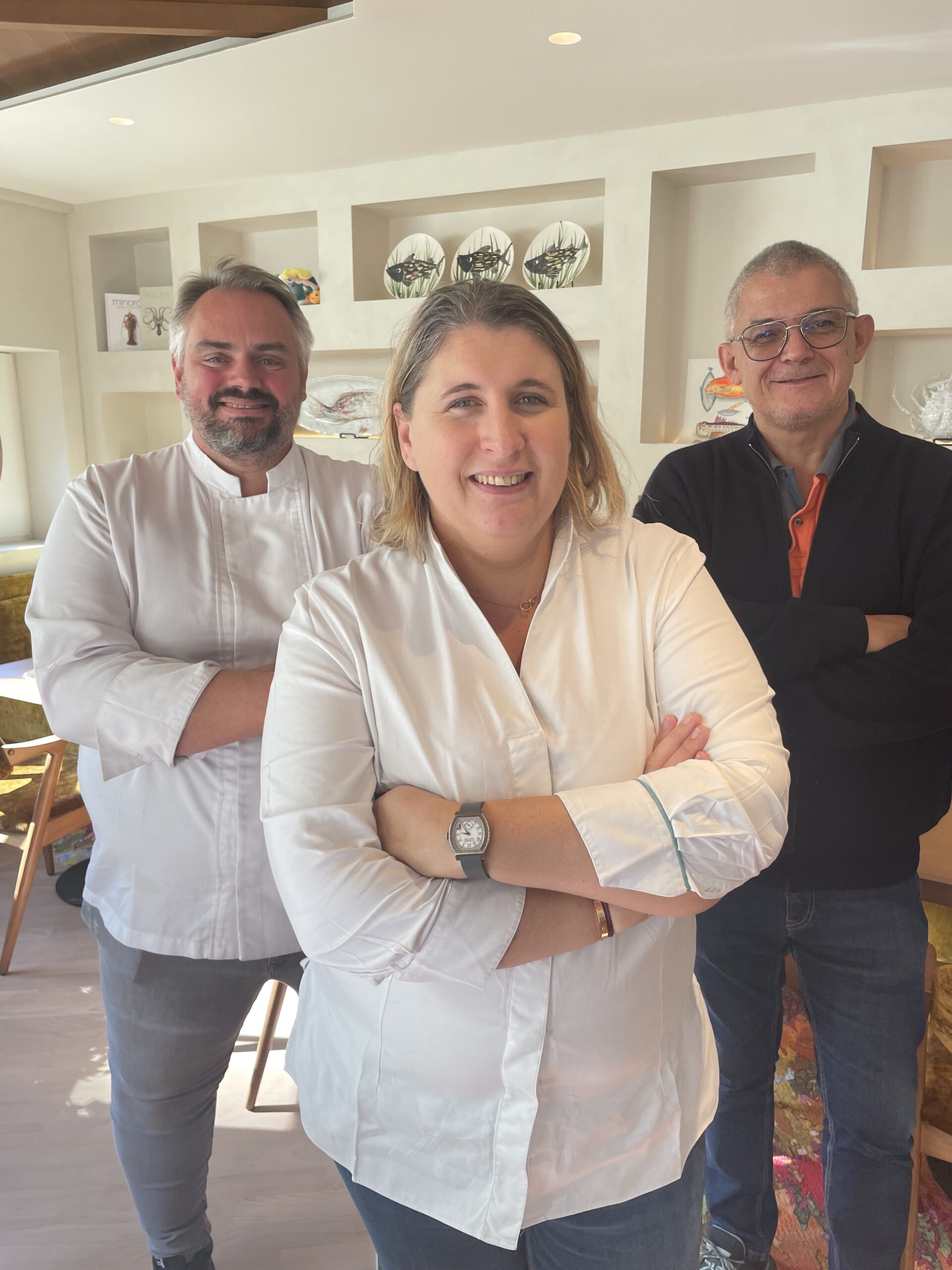 It was Rech, avenue des Ternes in Paris 17th. It has become ” Long live, House Sea“, a new temple of fish, shellfish and oysters, dedicated to the all-round sea and signed Stéphanie Le Quellec with her husband David, who has brought her spirit, her generosity, her memories of childhood and vacations in Brittany to this new-style house, which has been cheerfully redesigned with the Costa agency’s decorative touch. On two floors, with a beautiful shell mosaic (assembled by hand by the artist Victoire Fontaine) on the first, we discover a seafood cuisine to share with its excellent products and its pretty plates to try with gourmet friends. The homemade surprise? The kitchen competition of uncle/friend Philippe Jourdin, the MOF of Terre Blanche, with whom, for six years, Stéphanie played high-class understudy until taking flight to glory, victory at Top Chef, the two stars won at the Prince de Galles and taken with her to the Scène de l’avenue Matignon. David delivers his ideas and memories here, Stéphanie sets the tone, Philippe sets the music for him. And that gives a very successful marine symphony. We tell you everything very quickly…