Volvo has not only formalized its electric SUV, the EX90, the Swedish manufacturer, owned by the Chinese group Geely, has above all finally unveiled the design of its imposing electric car, its characteristics and its price. 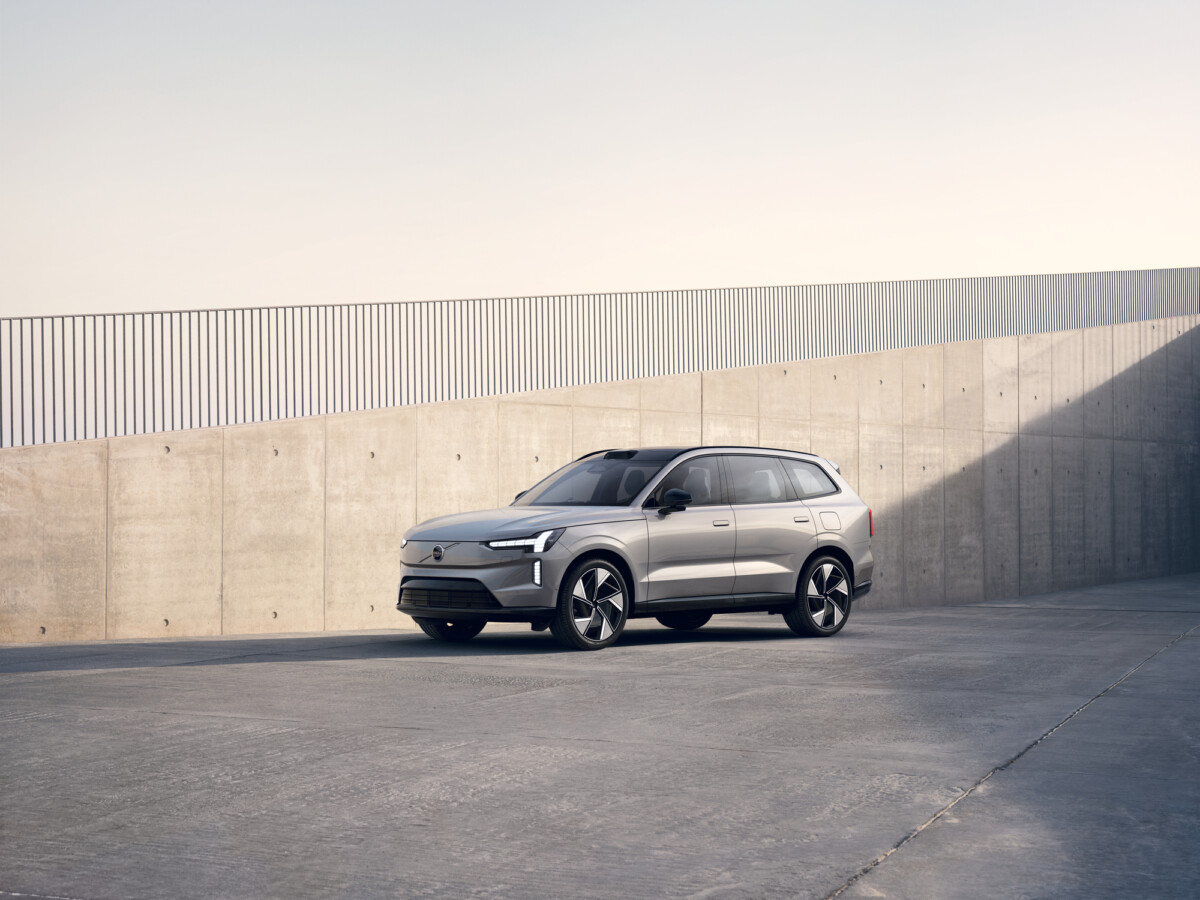 Volvo is refining its launch: the EX90 is an important issue for the Sino-Swedish group which has distilled information on its future SUV over several weeks.

This is the replacement for the enormous XC90, the 7-seater SUV. We knew that this big electric SUV would integrate a function to avoid forgetting the baby on board, we could also see the dashboard, with the screens and the interface (under Android Automotive), without forgetting some design elements, including the LiDAR. The EX90 was also known to use a Qualcomm Snapdragon processor for infotainment, with support for the Unreal Engine 3D engine. The icing on the cake: Volvo promises that two-way charging will reduce your electricity bill.

This November 9, 2022, we know almost everything about the Volvo EX90. Volvo places its huge SUV as a symbol of a new era for the Sino-Swedish brand. Indeed, Volvo will only sell electric cars by 2030, so we will discover a new model 100% every year. After the Volvo XC40 and C40, here is the EX90.

The objective for Volvo is to impose a new design standard to compete against the Tesla Model X, the top of the range of the electric leader.

Cousin of the recently unveiled Polestar 3, the Volvo EX90 brings a new electric platform, to replace the thermal and hybrid XC90. We are talking about a huge SUV here since we have 7 real individual seats. As we suspected, it is massive. 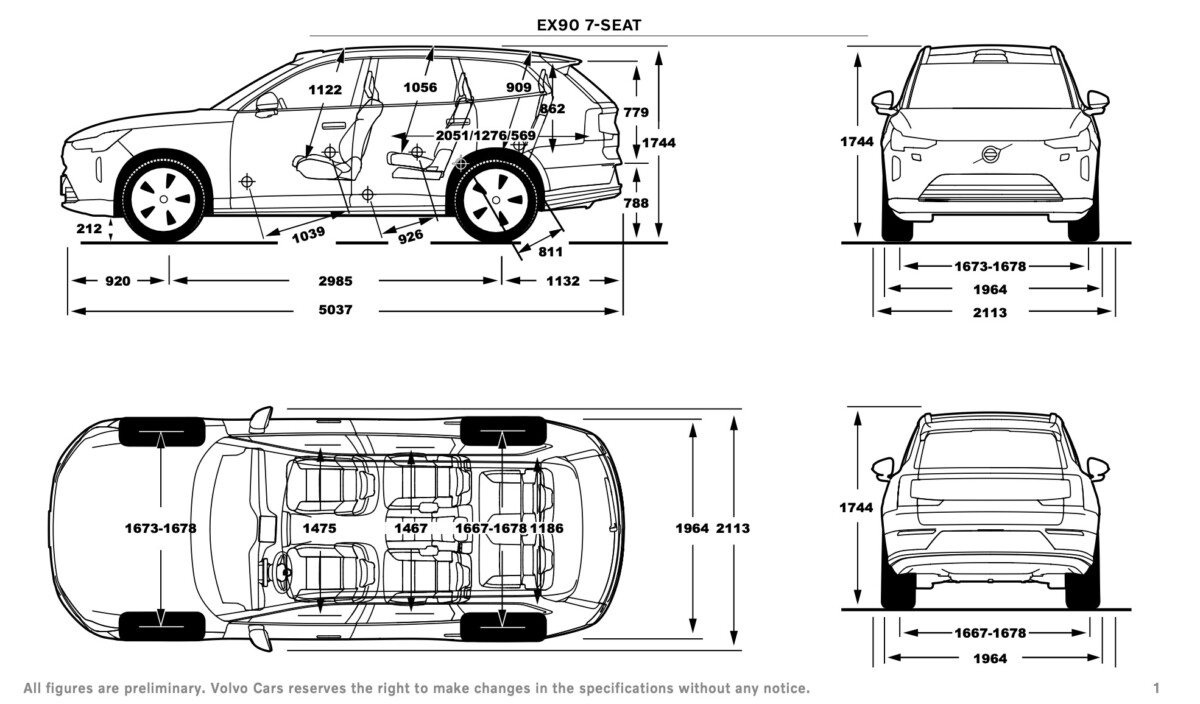 It is an SUV that introduces some stylistic novelties. On the outside, we note the presence of this new grille at Volvo, full and completely absorbed in the front. There is also the imposing LiDAR on top. 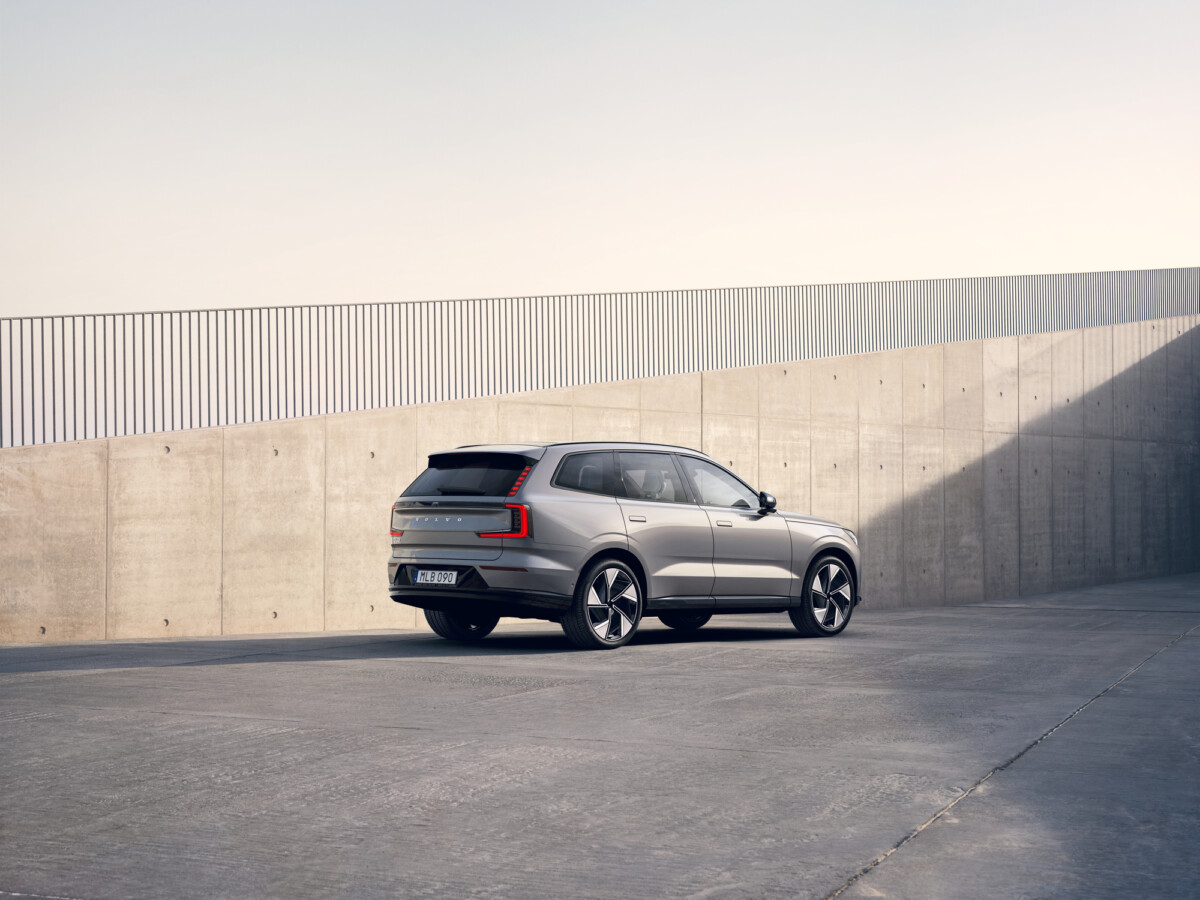 Premium SUV obliges, there is indeed an air suspension. When the speed is higher, the air suspension lowers the car automatically to reduce air resistance, increase stability and reduce fuel consumption. There is also an Off Road mode to increase ground clearance when needed.

Volvo also tells us about its active chassis technology with electronically controlled dampers. The objective here is to continuously monitor the car, the road and the driver. Each shock instantly adapts to driving and road conditions to optimize comfort and handling.

The rear face is more elaborate than that of the previous C40 and XC40. Inside, the cabin is unique to Volvo models. Well finished and of quality, but much more modern than the previous models.

The EX90 is equipped, from the entry level, with a panoramic roof which will provide more light on board. We also appreciate the interior, which contains no animal leather elements.

As we suspected, the trunk volume is enormous: 655 liters. With the second row folded down, we go to 1040 liters… and up to 1915 liters up to roof height. Finally, there is a front trunk (or frunky) of 37 liters.

In terms of maneuverability, the turning radius is given for 11.84 meters (equivalent to Model X). The Volvo EX90 can tow a 2.2 tonne trailer.

This SUV is relatively aerodynamic, since Volvo claims a drag coefficient (SCx) of 0.29 to maximize vehicle range. For comparison, the Model X has a drag coefficient of just 0.24 Cd, the lowest among production SUVs in the world. We will highlight here the efforts of Volvo in the matter, because Volvo did not act as a reference in terms of CX with a drag coefficient indicated at 0.329 for the XC40.

The EX90 is equipped with a Lithium-ion battery (with a classic 400 volt system) from Chinese CATL with a capacity of 111 kWh (108 useful kWh). She delivers 408 hp / 300 kW (in Recharge Twin version) or 517 hp / 380 kW (in Recharge Twin Performance version)all associated with four-wheel drive.

On the higher-end version, the Recharge Twin Performance, the two permanent magnet electric motors deliver a torque of 910 Nm against 770 Nm for the basic version.

The battery can be recharged in about 30 minutes on fast terminals (up to 250kW) and up to 11 hours on a standard home socket (up to 11 kW in alternating current).

In terms of autonomy, the EX90 incorporates a standard heat pump that is very practical for winter journeys. Autonomy is estimated between 560 and 585 km approximately (on the WLTP mixed cycle) depending on the versions and the rims (21 or 22 inches). In town, Volvo even mentions up to 680 km of autonomy.

This therefore gives a combined electricity consumption per 100 km of 20.7 to 21.9 kWh taking into account the losses linked to recharging. Gross consumption is more around 18.5 kWh / 100 km.

Two-way charging will not be available immediately as the press release reads: “ Available initially in select markets, our home energy management offering will include a two-way wall box and an energy management system, which will help you track and optimize your home’s consumption.”.

For infotainment, Volvo had already laid the groundwork. As standard, we therefore obtain a large floating central screen of 15 inches diagonally, an LCD panel indicated with high definition (it is not specified). Moreover, the screen has an anti-reflection coating, moreover the touchscreen works even with gloves (suitable for very cold regions).

Additionally, there is a floating display screen in front of the driver dedicated to the instruments. The latter is 8 inches and displays the standard functions. Finally, there is also a head-up display (HUD) whose definition is 800 x 480 pixels.

The entire infotainment runs under Android Automotive OS, with the Play Store, Google Assistant, Google Maps and Google services, thanks to Qualcomm Snapdragon processors. The graphics capability seems to be at the heart of Volvo’s proposal since the Swedish group highlights the modeling capabilities of Unreal Engine – the 3D tool developed by Epic Games. Volvo specifies native compatibility with Apple CarPlay and Android Auto, which will make Volvo XC40 customers cringe who have waited several years for the arrival of CarPlay.

In addition, a 5G modem is integrated for connectivity, it is used for OTA (Over-The-Air) updates and many other functions. For music, there are 14 Bose speakers, with a combined output of 940 watts.

Safety and driving autonomy is a big topic at Volvo, which mixes the two matters. Here we touch on the DNA of the Sino-Swedish group. The EX90 is thus equipped with multiple cameras, radars and ultrasonic sensors, but also with a LiDAR sensor (laser remote sensing). The platform behind it all is provided by Nvidia, with two Nvidia OrinX and Xavier chips. It’s simple: the Volvo EX90 is the first Volvo with such a computer platform.

Driving aids (ADAS) are very extensive: we therefore have the adaptive cruise control and distance (ACC) but also many technologies dedicated to safety, including an intelligent collision anticipation system (or Safety Assistance) , an active lane departure warning system, as well as a driver vigilance system. Finally, there is also the vigilance assistance system (or Driver Awareness) with blind spot monitoring, lane change assistance, reverse traffic alert, active brakes when stationary And so on.

The Volvo EX90 will be available from 107,900 euros in Ultra finish and Recharge Twin version. The Performance version will trade, meanwhile, against 113,100 euros. These prices are those with a more premium finish, it will be necessary to count on a sale price under 100,000 euros for the entry-level version.

Since the comparison is relevant, note that Tesla sells its Model X Plaid at 141,990 euros, while the Long Autonomy version no longer has official prices in France, we nevertheless imagine a price close to the EX90 Performance version.

In the 7-seater SUV category, few pretenders to the throne

As you can imagine, such an imposing SUV poses ecological questions with this electrification and a weight of 2.8 tonnes. This SUV has a large battery whose capacity exceeds 110 kWh, which obviously leads to overconsumption in the majority of trips that do not require as much autonomy.

With these dimensions, it certainly meets the needs of large families who need 7 places. As we noted during the World Cup, the choice is quite limited: there is the VinFast VF9 (early 2023), a new Vietnamese brand, the Mercedes EQB (already on sale), the new Tesla Model X (end of 2022), and by elsewhere soon the Hyundai Ioniq 7 and Kia EV9 (both share the same platform). We can also mention the Volkswagen ID electric van. Buzz which will arrive in a 7-seater version in the fourth quarter of 2023.

It also bodes well for the rest of the Volvo EX range, including the likely EX40, EX60 and possibly the rumored EX30.