For the first time, a Canada lynx (Lynx canadensis) totally black was seen and even filmed. A rarity unveiled on October 10, 2022 in the specialized magazine mammalia.

The color of the coat in lynxes is generally not the subject of natural extravagances. It is particularly stable in the genre Lynx, with, however, subtle variations depending on the species. For example, the Canada lynx (Lynx canadensis) has a coat that is generally silver-gray in winter and reddish-brown in summer with dark spots and black hairs on the tips of the tail and ears, the study recalls. But at least one exception exists.

On August 29, 2020, a black animal was filmed for several seconds by Thomas Jung, a researcher affiliated with the University of Alberta (Canada) and sole signatory of the study. He observed the specimen, armed with his mobile phone, while he was in a residential area surrounded by a boreal forest. The animal was not even particularly bothered by the presence of the observers – who were about 50 m away – and their dog. He ended up slipping away slowly after a few seconds. “The individual was photographed (photographs from the video, editor’s note) during the summer in the Yukon (Canada), explains Thomas Jung. It had a black coat containing whitish gray guard hairs“.

If its age and its sex could not be determined, the various experts agree to say that it was about a lynx, a deduction made after the observation of the size of its body and its silhouette. This is therefore the first observation of a totally black Canada lynx, a specimen described as “melanistic” in reference to the pigmentary substance present in its hair. Despite the poor quality of the video, “this observation has scientific value“, assures the researcher. 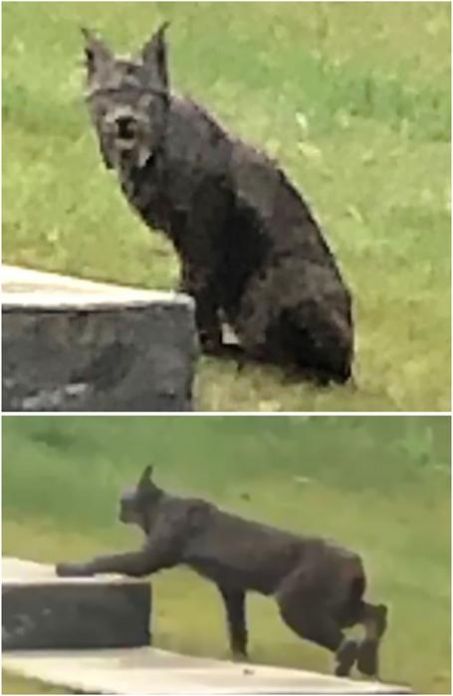 A coat unsuitable for hunting

His coat is surely like this in winter, also dark, which makes him particularly visible to prey when he tries to hunt. “Such aberrations are rare in species where the color is otherwise stable.“, emphasizes the researcher. However, melanism is relatively common in all felines. This phenomenon is found in a third of the species. In question, a genetic mutation which induces an increase in the production of melanin. “In other felids, melanistic individuals are usually found in the tropics, where moist environments likely allow these individuals to be more cryptic than others.“, continues Thomas Jung. Which is not at all the case here. The astonishing specimen must therefore adapt somehow to its environment. Future studies may allow us to learn more about it.