Stephen and francis are a couple settled in Canada. One day, an elderly cat came into their garden looking for something to eat. The feline looked suspiciously like one of their kittens, named Pruno. Stephen and francis therefore nicknamed the stray cat Granpruno.

The Canadian couple left food in their garden

To come to the aid of Granpruno, Stephen and francis left water and food in their garden. They preferred to let the cat loose in case he had a family. Nevertheless, Granpruno came running to see them when they went out. “He was looking for cuddles and was happy to have attention“, shared Celine Cromfrom the shelter Montreal Orphan Kittenswith lovemeow.

The wandering feline came to feed in the Canadiens’ garden for several days in a row. And then he suddenly disappeared. Several weeks later, the couple came face to face with Granpruno, rummaging through his trash cans. He seemed in bad shape. He had lost a lot of weight and was fragile.

When the cat saw Stephen and francis, he came immediately towards them, trudging along. The couple carried it into their home. Granpruno devoured the food bowl. Once satisfied, he was taken to the shelter veterinarian. Montreal Orphan Kittenswhere Stephen and francis are volunteers.

The doctor estimated the feline’s age at 9 years old. “Test results showed he had hyperthyroidism, which is believed to be the cause of his decline. He immediately started treatment and has been doing well ever since.”said Celine Crom. “He moved back into foster care with Steph and Francis, and immediately found his place in their bed. He loved other animals and was friendly to everyone.“ 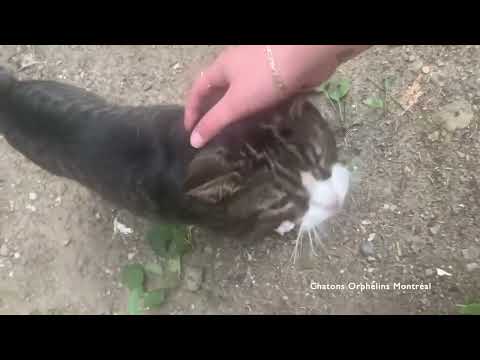 Once recovered, Granpruno was very enthusiastic about his new life. From the height of his 9 years, he behaved like a kitten. He was constantly seeking affection and playing with feather toys.

The feline is definitely saved from the streets

After a few months of living together as a foster family, the couple made a decision. The agreement was so good with Granpruno that they chose to adopt it definitively!

An agricultural engineer by training, Wendy combines her passions for words and animals by writing for Pets-dating. A freelance web writer, she shares her home with many furry and feathered friends: an Australian Shepherd, chickens and even racing pigeons!