They call it the day of the santa pawsderived from the word Santa Claus in English (santa claus). Every December 24, members of the shelter Dogs Trust Irelandat Dublintry to make the holidays of Christmas a bit happier for their resident dogs. As the newspaper says ABC7NEWSthey then had an idea that moved more than one on social networks…

Cover their dogs with gifts 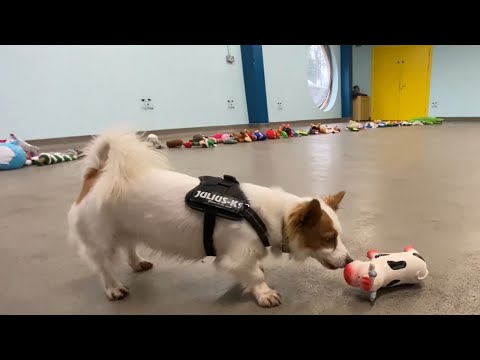 In a large room, the volunteers line up several toys one behind the other, then let the dogs choose the one that caught their eye. Stuffed animals and other objects are often donations. The doggies are overjoyed and wag their tails in all directions!

After smelling and touching most toys, it seems that dogs prefer the loudest ones! You can hear them squeaking their new finds. With this, there is no longer any doubt: their end-of-year celebrations will be far from calm!

Their annual ritual, full of love, has won the hearts of Internet users who hasten to each publication to thank the members of Dogs Trust Ireland for what they do for the animals. ” We hope you smile as much as we do while watching this video. ” the volunteers then express themselves on their page Facebook. An attention full of love that warms the heart in the middle of December…

A great friend of animals from a very young age, Maria gives them a real devotion and follows them everywhere on social networks. Coming from a linguistic course, and therefore very keen on writing, she now takes pleasure in rubbing shoulders with the animal world accompanied by her most faithful four-legged companion, Monkey.